It is clear that currently there are larger "fires" in the country other thanthe real forest fires every summer. However, in the same way, "there were no problems" with the ship rescue, until "Vera Su" got stuck near Tyulenovo. It became clear that there are actually problems, they are many, and if we do not think ahead and do not speak and discuss, including in public, we will always be surprised by winter, summer, snow and fires.

At the end of September, one of the last forest fires of the season in Bulgaria was next to the city of Karlovo. In the mountainous area, the firefighters had difficult access but fortunately it all ended under control with complete fire neutralization. However on the TV we saw that it was extinguished with hand tools and old fire trucks.

There are actually new and modern fire fighting vehicles in Bulgaria. But why don't we see them in the "hot" places in the summer?

According to the European rules, the money allocated for their purchase, delivery and warranty service are up to three years. After the expiration of that term, the fire fighting officeshave no longer a budget for repairs and often refuse to put a new vehicle in bumpy and difficult terrain, being afraid that afterwards arepairwill be needed, for which they have to pay. “In some places, the problem is solved by preserving, if possible, the old cars, whose protection and technical capabilities are much more limited” said Eng. Leonardo Stoyanov, technical director of Avto Engineering Holding Group, which is one of the main suppliers of such equipment in the last 15 years.

Not to mention that good technology will not only allow faster and more efficientfire extinguishing but it can also save lives. Literally. This summer, two foresters died, left without maintenance and without equipment. The constant stress to which firefighters and rescuers are subjected can be greatly alleviated if they have modern, reliable and easy to maintain specialized equipment.

Since its foundation in 2003 until now, the Bulgarian company "Avto Engineering Holding Group" has been committed to having in its company portfolio different types of specialized equipment for firefighting, police and emergency medical care.

In 2006 the company made the first delivery of 42 firefightingtrucks for the regional fire services in Blagoevgrad, Haskovo, Smolyan and Kardzhali, including 4 emergency rescue vehicles.

"The equipment we delivered at that time was middle and heavy class and has been used in these areas for 15 years, thanks to its high quality workmanship, reliability and suitability for repair. This project, as well as the subsequent dozens of other deliveries, was implemented in partnership with the Polish company WISS. Our successful joint work continues today"says Julian Dimov - manager and owner of"Avto Engineering Holding Group".

In 2009 and 2010, for the needs of the structural units of the General Directorate "Fire Safety and Protection of the Population" the company supplied other 18 vehicles for protection of tourist complexes and the busy road corridors from the European road network. In the period 2012 – 2016the holding successfully performs new deliveries, thanks to which a large part of the old firefighting and rescue vehicles and their equipment have been replaced.

"The last major supply of firefighting equipment was in 2015, when Avto Engineering Holding Group delivered 67 off-road vehicles suitable for use in all terrains and designed for extinguishing forest fires. This equipment is distributed throughout the country and has been working flawlessly and accident-free for 6 years now, it is serviced on site by our mobile service teams, which saves a lot of costs for the firefighting services for transporting the equipment to the service centers for warranty service", adds Eng. Stoyanov.

“In last years, there has been a global trend in extinguishing forest and field fires using light trucks such as pickups and UTVs, characterized by their high passability. Therefore, "Avto Engineering Holding Group", which has R&D department and production site has developed a mobile system with high pressure for extinguishing fires - Shumcar ™”, says Julian Dimov.

"The great advantage of this system, which we managed to develop as a modular system not only for extinguishing fires, but also for responding to various types of natural crises, is the ability to adapt a vehicle for technical support in forest fires, floods, in case of disasters and for other special purposes. Each module can be easily replaced with another according to the purpose and need. When the COVID-19 pandemicbegan, a module for disinfection of large areas was developed on the basis of Shumcar™.

Although the General Directorate "Fire Safety and Protection of the Population" is taking appropriate actions, the main problem in the supply of fire-fighting equipment is different and it refers to most of the public procurements in Bulgaria. The criterion for the lowest price, set in almost all tender procedures, leads to pressure to buy low-quality equipment. It breaks more, has worse characteristics and over the years actually costs a lot more. Important indicators such as the availability and quality of the supplier's service site, as well as experience and reliability in the execution of previous orders are not taken into account or have little weight in the evaluations. When the strong will of the firefighters is combined with good equipment, then the chance to save lives and the nature significantly increase", says Dimov. 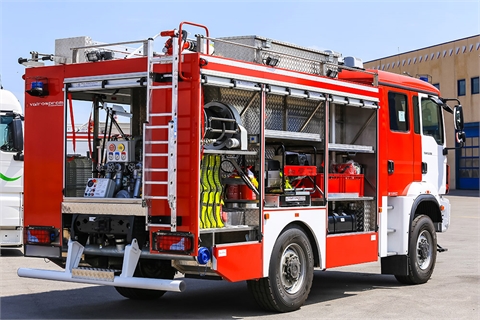 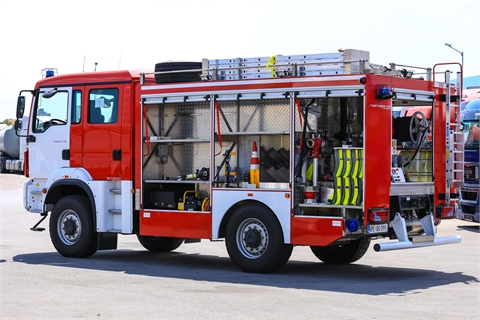